August evenings in Alicante were usually warm and breezy, which was great with a few cold pints of San Miguel on the marina. Naturally, I had to try the local cuisine as well. Paella is pretty much everywhere in coastal Spain, but there are regional varieties. Whereas Paella Valenciana is a chicken dish, Paella Alicantina was principally infused with seafood – particularly types I’d never tried before.

Even though I was a language student, I wasn’t one for being too adventurous when it came to trying new food, but still, when in Rome and all that. So, I did at least try monkfish, calamari and prawns but subsequently opted to eat the rice around the seafood.

A short walk from the marina, past the night-time streets lined with gentlemen selling cheap flashing tack and ladies offering hair braids, were the narrower, cobbled streets of the old town, home to many tapas restaurants. 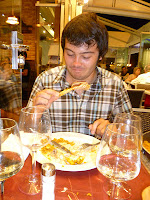 Tapas has a reputation, in the UK at least, of being relatively expensive and not providing a filling meal. In Spain, it tends to be much cheaper – about €2.50 a dish – so four dishes and you have the equivalent of a meal in price and quantity, but richer in variety, especially when sharing with friends. What’s also great is that there is a range of complexity in the food, from potato croquettes and meatballs to chorizo in a wine sauce and tortilla, all with a bottle of Rioja (to share). Beautiful!

Dinner in Spain is around 9pm, much later than the 6/7pm we’re used to in the UK, so by the time dinner was over, it was around 11pm – the earliest point when the clubs would open. Clubs in Spain are fundamentally the same as in Britain, except one that I went to charged €8 entry…if you’re a guy. Girls get in for free. It was probably worth it seeing as we stayed here until around 7am.

Alicante isn’t short of clubs, pubs or bars, or people incessantly pestering you with flyers and offering free drinks to entice people through its doors. One of these was an “Irish pub”. I’m not too sure what the obsession on the continent is with so-called Irish pubs. The only pre-requisite seems to be to sell a Guinness for €7 and have a guy called Paddy work behind the bar. But this was where I discovered Beer Pong – a game that involves setting up 10 cups in a bowling pin formation at either end of the table and bouncing a ping pong ball into the opponents’ cups so they have to drink up. The great thing is that even if you’re not very good at it, you’ll think you are by the end due to the vast amount you will have drunk.

Other bars offered karaoke and Salsa lessons. Although I tried both, albeit unsuccessfully, I preferred the latter and still went back a few times, but if there’s ever a time to try new things, that was it – in a new place with new friends…